By Barry Johnson from Taranto Systems

There’s no doubt about it: managing permits is hard. I have been involved with their implementation since the early 2000s. While they were complex then, they are even more so today.

Early permits implementations, which first arose in the London boroughs, required residents to send paper applications together with required evidence to the council. Contents were scanned and processed, with paper permits posted to successful applicants for display in vehicles.

This process was highly labour intensive, requiring many back-office staff. The transition to virtual permits has reduced the effort, but as the next section will show, the challenges associated with managing complexity have arguably exceeded those related to workload.

Permits: Why So Hard?

We probably all know of organisations that have made the mistake of thinking permit systems used in other sectors can be easily transferred into local authority environments. In my opinion their error was in failing to appreciate the vast complexity involved. But what exactly is it that is so difficult?

Firstly, all councils do permits differently, and they all tend to have rules. Many, many rules.

Consider a ‘standard’ parking permit for residents. Historically, councils have tended to have upwards of 20 different permit types – in some that might be as many as 50, to cater for the various elements that make up the eligibility and pricing of the permit.

The above scenario applies to the most basic resident permits – and the complexity increases significantly with those that apply to businesses, specific street locations and so on.

Additionally, there is a trend towards highly complex Controlled Parking Zones (CPZ), including restrictions applied to parts of streets, or bays outside particular house numbers; or one side of the road but not the other. Of course, this makes things difficult for Civil Enforcement Officers as well as system suppliers.

Now consider that the above rules, many of which may involve scaling pricing, vary from region to region. We all know parking regulations can be confusing for members of the public – so just imagine coding the rules to accommodate the almost countless scenarios.

From a technology perspective, managing permits has always been a challenge. Over the years we have found that when working with a new client, even with a highly developed system, we typically cover around 95% of an authority’s requirements ‘out of the box’ – leaving 5% requiring additional development.

While permits have always demanded flexibility of technology suppliers, the requirements continue to increase, driven by a range of factors including permit waiting lists; the need to accommodate growing numbers of residents in flats and apartments; and scaling pricing for multiple permit households, vehicle types, and parking locations.

Emissions-based permits are another area of growth. Already used in boroughs such as Ealing, I expect this trend to continue as councils aim to encourage a shift to electric vehicles.

It is also worth noting that we are seeing increasing demand for permits in private parking, though the requirements tend to be far less complex, so solutions developed for the public sector are well equipped to manage this area.

The Rise of Self-Service

But perhaps the most significant recent change is the shift towards the public managing their own permits via online portals. Residents can set up their own accounts, log in, and view or apply for a range of applicable permits, with those not relevant hidden from view.

Self-service minimises fraud by restricting applications based on relevant eligibility criteria such as location, reduces workload for back-office staff, and enables residents to access their account at any time and from any location.

To deliver permits technology in line with modern requirements I see four key areas, each of which are summarised below.

Technology solutions must be highly flexible to manage permits’ inherent complexity. While much can be achieved through system development, we have also created extensive configuration to enable Superusers to add or edit permits without the need for chargeable services. This ensures responsiveness as changes are instantly reflected in the live system.Another important element is the ability for users to easily create visual maps that clearly outline controlled areas and any exceptions. This gives council staff the flexibility to implement complex rules and share them in an easily understandable way – reducing workload and confusion for all concerned.

Some of Taranto’s largest local authority customers use Permits, including Tower Hamlets, Wandsworth and Haringey. To provide an indication of the scale, almost 2 million permits are issued each year through the Taranto system.

Given increasing urbanisation, demand for permits technology will only increase. Consider the workload for council staff managing 500,000 permits per year – it’s just not possible without technology that can manage both the scale and complexity.

By integrating permits systems with local MyAccount; electoral roll and council tax systems; and external vehicle system checking systems such as Experian; the entire application and approval process is streamlined for all stakeholders.

Authority staff can review reliable information relating to proof of residence and vehicle emissions, reducing the workload required to process applications, avoiding fraud or underpayment, and ensuring that parking spaces are allocated fairly and paid for correctly.

Additionally, integration with ticket issuance software improves processes for Civil Enforcement Officers, who can quickly and easily review permit information after entering or scanning a Vehicle Registration Mark on a handheld device.

We know permits can be frustrating for the public, so if we are asking people to undertake the administration effort, we owe it to them to streamline the process.

At Taranto we have spent a great deal of time thinking about user experience and have chosen to align our self-service portals with the .GOV webpage structure. This ensures they meet all accessibility requirements including readability, availability of voice control, adoption of Responsive Web Design (so the site works well on different device types) and more.

Additionally, aligning with the .GOV structure ensures a user-friendly interface with a familiar look and feel, and consistent workflows to guide users through processes.

As a result, applications are as simple as possible: integration with council tax and electoral role systems automates data entry and minimises required evidence; where evidence is needed the instructions are clear and documents can be instantly uploaded; and where permits are specific to a vehicle this can be automatically completed based on vehicle registration information.

Finally, it is also possible to automate the approvals process, so successful applicants receive permits without delay.

Councils rightly take permits very seriously – they are vital to manage correctly and can be highly frustrating for the public.

As I have tried to show in this article, permits are incredibly complex. Suppliers must provide highly developed technology integrated with third-party systems, delivered and supported by technology experts that genuinely understand the enforcement sector.

In the last five years Taranto has allocated more development resource to permits than any other area, resulting in a solution that can manage the complexity and scale required of modern permits solutions.

However, permits will only become more ubiquitous and more complex. Applying the requirements outlined above will ensure we continue to deliver solutions that councils and the public require.

Barry Johnson is Senior Technical Director at Taranto Systems. Having begun writing software as a teenager, in 2000 he and a group of colleagues formed a business called Traffic Support Limited, which focused on developing parking enforcement software. Today Barry leads a team of more than 25 software developers focused on delivering innovative technology solutions that support the enforcement and management of parking and traffic violations, parking permits, civil enforcement, clamping and removal, and more. 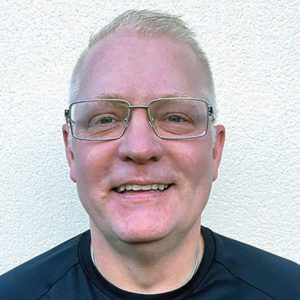 Do you want to know more about Taranto's Parking Permits Technology?